From housemate to best mate

When i first got into diploma, i was a lone ranger. I was comfortable going places alone, having dinner alone (people were still looking down on solo diners back then).

After my first year, my hostel application got rejected and i needed to find a room to rent. So i rented a room of a semi-d house with strangers. The house was shitty, insanely expensive for the price. It's the second last house from the street's dead end. There weren't any street lights at night. Whenever i had to come back home late night, my guy friends would follow me from behind, let me enter the house and they would lock my gate for me. The street was that scary. The view from my window was thick bushes. It was that scary, might as well be the set of Malaysia's next horror movie.

For a room-for-two in Lendu that provided an aluminium kitchen utensils rack as a wardrobe, RM200/pax is batshit expensive. I wasn't even allowed to turn on the water heater: "Rina, jangan pakai water heater eh? Sebab mahal. Setiap kali tekan, 50sen".

But despite all that, i am forever grateful for one thing. I found another best friend.

Me and my then housemates agreed that that house was shit. One day after class, one of them called me and said "We've found another house and we're moving out today. Do you wanna come with?" and i said yes in a heartbeat.

The person who called me was Mai.

And ever since, things got along very well. Iman, Alia and I took her to almost everywhere that we went to. Things were so much fun back then, that even staying at home was fun. And she can cook. She can really cook. Name a lauk and the next day i would drive her to the Alor Gajah pasar and she would cook it for lunch.

Once, i had high fever and i just slept the whole day on the floor, covered in my comforter. Suddenly, Alia and Mai woke me up. When i turned around, Alia had a hand towel with her and a bowl of water. She started tapping my forehead with the wet towel. Mai, on the other hand, had a bowl of freshly cooked porridge and started feeding me. This is one of the moments that i will never forget till the end of time. Mai is definitely a family member 'i found' in Lendu.

We were close back then but not as tight as we are now. It's nice to know that we practically grew up together. At this point, i'm comfortable to talk about almost everything with her. We did the dumbest things together and i'm certain that we are changing to the better together too.

Moving into this shitty house was never a mistake. Happiest 24th, Maizura. Thank you for being the second most honest person i've ever known. I love you. 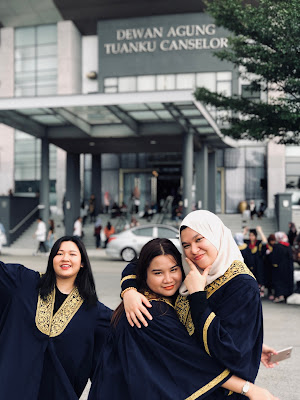