To be behind/in front of the camera?

In a production of movie, there will be someone who's in front of the camera (public's eye) and someone who stays behind the camera. Unless if the project is a solo project.
Mat Luthfi/Niga Higa/Kev Jumba; the vloggers, for example. Self-written script, self-recorded, self-edited. Wow, forever alone nya.


IN FRONT OF THE CAMERA.

What do you get if you're the person in front of the camera?
Well, you get the fame of course. If the production is a success, you get the compliments. People would say "Zac Efron's High School Musical" right, instead of "Kenny Ortega's High School Musical"? Precisely. And it's definitely the head start of your career. You can be a diva. Just scream 'Oreo' and a cart full of Oreos will be sent to your dressing room.

For you females, all the datuks - datuks will come by in a few months time after your debut. Lol.

You don't get the fame. You're invisible. People don't even know that you're involved in the production no matter how big the production is. Don't believe me? Okay, who's the director of Harry Potter? Twilight?
See, i can here the crickets from here.
But that's the best part of all. You don't get the fame. You don't have to take care of your appearance like those actors do. Stay on the ground. Eat on the ground. And you can even eavesdrop to know people's comment about the production. What, they don't even know you made it ;)

You don't get the credits? Of course, honey. But you get your satisfaction, don't you? The cast of the movie might be bombarded by fake compliments from public. You, you get nothing but the truth. And when you hear people talking about it, you can walk with pride.

Stand straight, look up and smile.

Okay, the Ray Ban and Ducati part tu tipu je la. I just presume it to be that way. Or better. Anyway, you can judge which spot i would pick myself. In the back line of a production or the face of it. I'm too used to being behind the camera that i don't even smile the same way whenever my picture is being taken la, if you noticed. Camera shy. Lol. 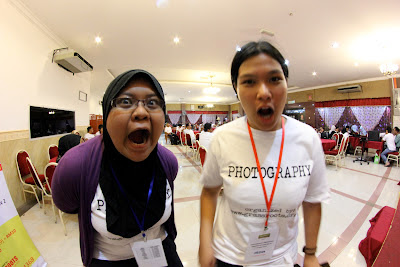