After awhile not watching TV and stuck on 9gag, i finally got out of my shell, padahal keluar bilik je pun, and tune on to TV3 to watch Anugerah Bintang Popular.


Now kids, when i say i got out of my shell, doesn't mean, i turned off my laptop and left it in my room. I took the laptop out with me and opened a new tab to Twitter. Yes, Tweedr. Sambil tengok, sambil tweet. That's what we on twitville do. Criticise people's dresses, people's voices macam kitorang ni Joan Rivers or Simon Cowell. Bakat terpendam ni woi! Bila tengok award shows macam ni, out goes the Dress Nazis, the Voice Nazis. You name any type of Nazis.


Celebrating the 25th anniversary of Anugerah Bintang Popular Berita Harian, hands down, the best ABPBH yet. Pay no heed to Wan Maimunah's hat, it's definitely the best rendition of songs back at my time. Not saying that i'm that old yet! But hey, ya really think that 10 year olds right now even know Sheila Majid? Or maybe Isabella by Amy Search? You might wanna think twice.


Being a part Joan Rivers and a part Perez Hilton, i managed to screenshot some worldwide, i repeat, WORLDWIDE TRENDS! 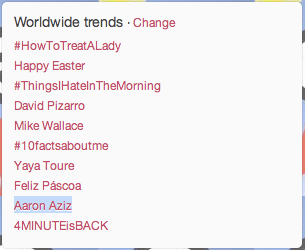 Now this is Aaron Aziz trending after he performing Ombak Rindu on stage, i think. At times like this, Malaysia can dominate Twitter, ey? 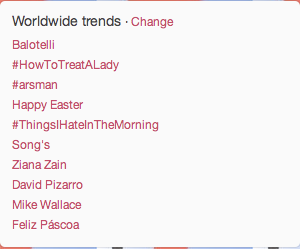 This is Ziana Zain trending after she performed what-song-i-forgot with Lan. 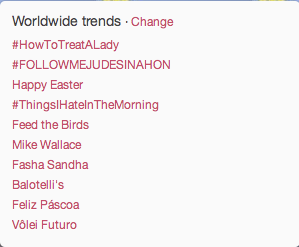 This is Fasha Sandha trending after she got and award. She went on 4th worldwide after that! 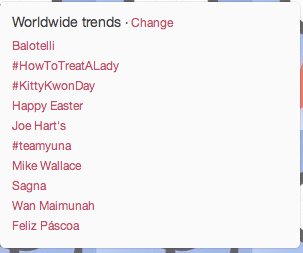 This is Wan Maimunah trending after she showed off her wonderful sized hat which can support up to 5 people! And not to forget, #teamyuna trending at number 6 :) 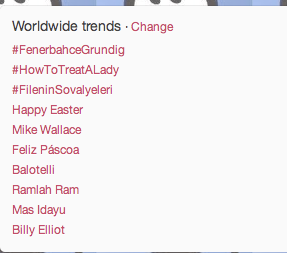 This is Mas Idayu trending after her gelek gerudi. And Ramlah Ram trending right above her. 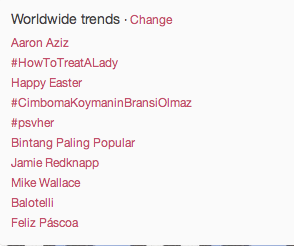 THE SEXY AARON AZIZ RIGHT AT THE TOP OF THE CHART!!

Thank you Malaysia for paying extra attention on our entertainment industry instead of our ecosystem / political issue that may harm us :)